Once again Bishops Nympton forged a name for themselves in the North Devon Tag Rugby tournament.  Despite the drizzle, making conditions very difficult to play in, our players performed brilliantly.  An early 4 – 2 victory against Horwood and Newton Tracey set us in good stead for the remainder of the group games.

Two closely contested games followed, but our organisation in defence and our attacking flair were rewarded with  a 3 – 1 victory against Instow, and 4 – 3 win against Chittlehampton and Filleigh.  We finished the group stage strongly with an impressive  6 – 1 win against Berrynarbour.

Topping our group gave us the confidence and fighting spirit required to progress through to the knockout stages.  We looked strong and confident against Swimbridge, defeating them 5 – 2.  Semi final time against a very strong Shirwell side.

An exciting match, back and forth between two very good teams.3 – 3 at full time , our fate would be decided using the golden try rule.  First team to score wins.  Despite a rugged defence, Shirwell managed to come out on top.  The disappointment was clear to see on our players faces.

We are so very proud of their achievements.  A top four finish out of the whole of North Devon is an impressive accomplishment.  Well done to you all. 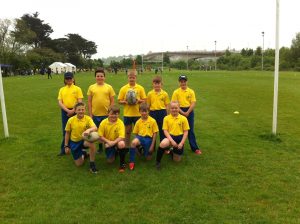