Our loyal supporters witnessed a dominating Tag Rugby display in this year’s SMCC Tag Rugby tournament. Our players were well organised defensively and showed great attacking flair with the ball in hand.

An 11 – 2 victory against South Molton gave us the early platform to build upon, followed up with    9 – 1 and 9 – 3 victories against Chittlehampton and Multi Academy Trust.  Our semi-final place guaranteed we were keen to top the group with victory against High Bickington which we secured with a 5 – 1 win.

Full of confidence, we went into the semi-finals with the belief that we could win the whole competition. We went back to basics to ensure that we remained a difficult team to beat.  With a comfortable lead at half time we reverted back to our more stylish attacking style of play winning the game 13 – 6.

A tense and tight start to the final against Brayford with both teams coming close to scoring. Our defensive structure remained strong and helped us to build momentum during the game.  We proved to strong an outfit for Brayford to deal with and ended our dominant tournament display, winning the final 8 – 4.

Back to training with winners medals around our necks, but an understanding that there is now more hard work to be done in preparation for the North Devon Finals. 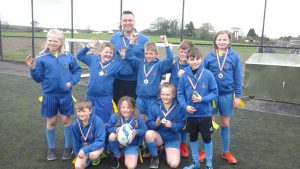