On Sunday 27th January 2019 Lily Govier played at Okehampton Hockey Club’s Junior Hockey festival. Two teams from Plymouth Marjon, two from Taw Valley and one from Sidmouth & Ottery Hockey clubs took part with a total of 4 matches for each team. As Taw Valley’s only Under 10 Girls Goalkeeper, Lily played the first match with their A group and another 4 with their B group. 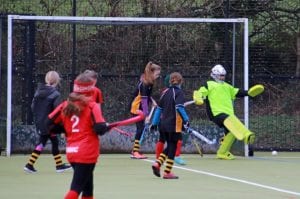 Lily kicks away a shot at goal. Great reflexes and instinct

The first match against Sidmouth and Ottery ended up a goalless draw with Lily saving several attempts off the line. Lily then played a quality B team from Plymouth Marjon holding her nerve to keep the score level at 0-0 . A second game against Sidmouth and Ottery was again goalless keeping Lily’s flawless record intact. Game 4 was against possibly the best team on the field, Plymouth Marjon A, who took an early lead, only for Taw Valley to equalise moments later with an exceptional strike from Holly. Lily made some spectacular saves, blocking one on target strike, blasting it clear to the centre of the pitch. 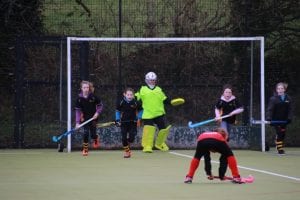 The final game against Taw Valley A saw just one goal from Emily pass Lily’s goalline. Again some fantastic  reflexes saw the scoreline hold at 0-1. In only, Lily’s second tournament as Goalkeeper Lily managed to play 5 games, keep 3 clean sheets with just 2 goals conceded against some tough opposition. Lily was awarded Player’s Player of the Tournament for her efforts. Lots of exciting opportunities coming up this year including a chance to train with World Number 1 Goalkeeper, Maddie Hinch. 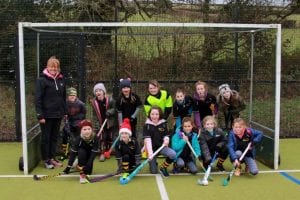 Lily with her team mates and coach after the tournament. 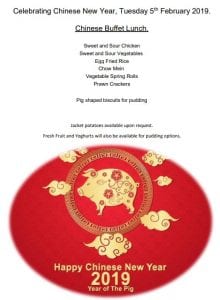 Fresh Fruit and Yoghurts will also be available for pudding options.